The Idealist - No Surprises!

Found this over on Marianne's Blog, No surprises here!
What's Your Personality Type?
Posted by Joanna at 5:07 AM 8 comments:

Our SP10 hostess is quizzing us again with a couple of questions, so I thought I would play along.

With the weather turning warmer, many of you are thinking of traveling (though some of you have just returned, you can play along). 1) What do you pack to knit? and 2) What do you hope to shop for?

Assume that you will be gone for ten days to someplace "foreign" that is known for having great knitting locations. (Bonus: Where would you go on a "knitting holiday"?)


Hmmm, a knitting holiday, my immediate reaction was to go to New York, I've never been to the US and I could take in the sites and visit some of the local yarn stores we read about, of course Habu would be top of my list of places to visit, and if I was really going I would have a long list of places to visit and things to see. I would probably be looking for something special or unusual like Habu's paper yarn, I like to think I'm quite a discerning shopper, I won't just buy for the sake of it, unless it's something I can't do without.

What would I pack? Well since there are so many rules and regulations about carrying knitting needles I would have a good book for the flight, and something small and portable like socks, and I couldn't travel without my spindle and some fibre!
Posted by Joanna at 12:32 PM 8 comments:

Jo Grins and Bears It! 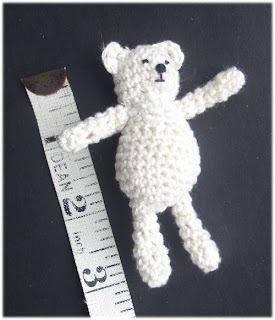 Remember that gathering of crocheted bits I showed you on the 25th April.... How can something so small take me so long to finish?


Anyway I've been tagged by Angie with the 7 Random Things Meme,which has been doing the rounds, so here is my best shot...

Well for starters sewing up knitting or crochet projects is not one of my favourite things, maybe that's why I love to spin so much....the finishing process for yarn mainly involves washing and then setting the twist, I find stitching up quite stressful and need to be in the right frame of mind.

I hate my belly button being touched, the feeling when somebody touches it, well its a strange expression but it goes right through me, makes me shudder to think about it!

I have 3 tattoos, the first one is a small heart on my right shoulder, I had it done when I was 18, by a man called Fat Bob at the local Tattoo parlour, the second is the Chinese symbol for birthmark on my right ankle (I was being ironic), and the 3rd and largest is a tribal symbol between my shoulderblades.

My short hair has been many different colours but the brightest colour it has been is bright turquoise, one of my friends said I looked like a troll doll, you know the craze for these bright haired little dolls which comes and goes. The colour itself didn't last very long as I didn't like the attention it drew, I like to keep a low profile, but it seemed like a good idea at the time.

My first driving instructor told my siblings I would never pass a driving test. I passed in 1998 after 20 lessons after not driving for 10 years, I've now almost been driving 10years! I love to drive too!

I ran myself over with my own car! My handbrake had broken and I was having to leave my car in gear, something I don't do as a rule. It was a frosty morning after a long night shift, and I was taking moving boxes to my car, as it was frosty I opened the door and stuck the keys in and started the car to warm it up, forgetting that the car was in gear, the car itself jumped up the curb behind it and started rolling down a grassy bank, only being stopped by the wire fence at the bottom, as the car rolled down the hill I let go of the keys superfast and went under the car door, I was only bruised but there is still a dent in my leg. Apparantly this was all captured by the security cameras where I used to work but they never did manage to get me a copy.

I am absolutely hopeless at establishing a routine, although I do manage to clean my teeth everyday!

So thats seven, I'm not going to tag anyone else because it seems to be covered in most areas at the moment, if you want to list seven random things just go for it!

Yesterday afternoon I decided to try something different with the single of Suffolk fleece I had spun. I plied it with an unusual 'novelty' yarn that I had found in the sale at my local yarn shop. The novelty yarn knitted on its own is quite hard on the hands, almost a nylon twine with the long lash every few inches, so I plied it with the green Suffolk single that I had test spun for Rachel. I also added a few spots of merino fibre between the plies as I spun them together, it's turned the novelty yarn into a softer more interesting yarn, and I think it will make a nice decorative garter stitch band around a simple knitted bag! 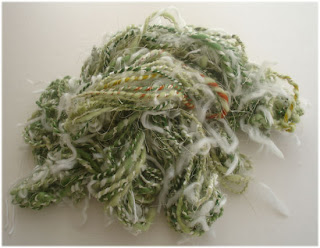 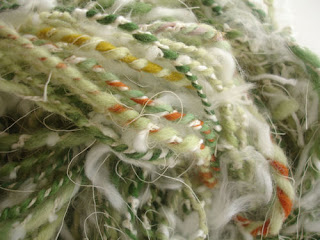 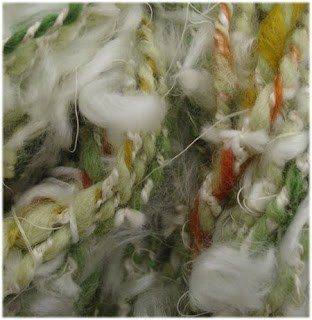 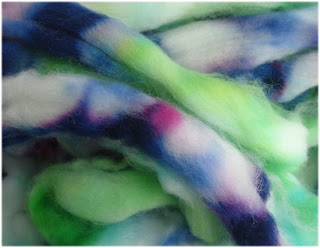 Yes Marianne, it is all about spinning at the moment, this is the Superwash Merino from Crown Mountain Farm, in the Twist and Shout colourway, I just love to watch the colours dancing through my fingers! 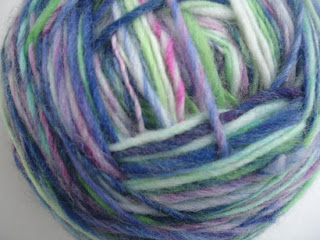 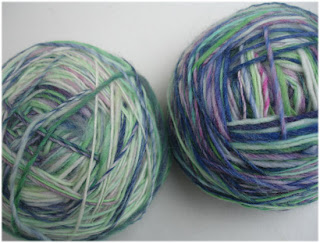 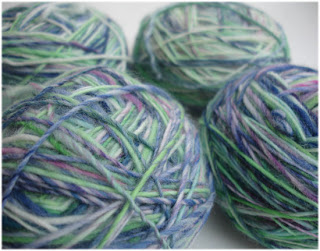 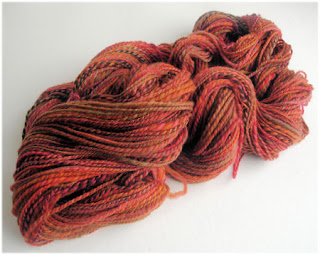 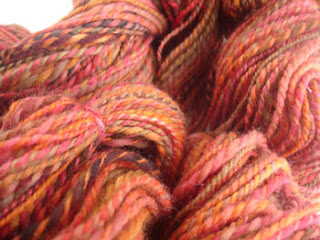 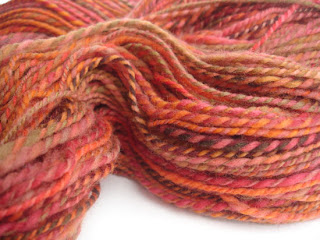 As you can see I got some brightness in the loggia yesterday for a little fibre foto shoot! 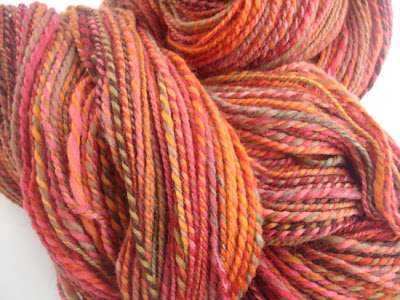 I also forgot all about my 100th post which was the previous post, only noticed when I logged in to put up the new photos, I got a bit carried away but I love the way the colours change in this yarn, you can see more on flickr!
Posted by Joanna at 2:01 AM 8 comments: 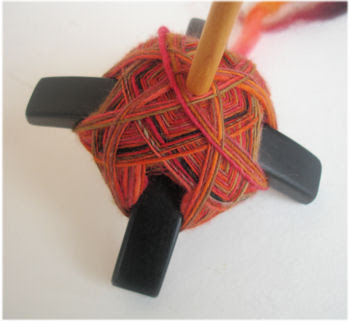 This is no way to wrap your Turkish spindle, but I just got carried away as the colours kept forming this mandala like pattern. I finished plying the Sunset fibre from Suzie Thursday night, but there hasn't been the right sort of conditions for photos just yet.

The back of my cardi has been blocking all day, and I've been spindling some new fibre up on the Turkish, I've done 3 oz since Friday, photos as soon as the weather brightens.

No knitting content, I'm turning the heel on my socks using the wrapped method, which I haven't done before and need some quiet time to settle down and get it done.

This week I'll be catching up with my homework for college!
Posted by Joanna at 9:26 PM 8 comments:

There's been a hum of activity around here this week, so I thought I'd just show you some snippets of what's been going on:

I've finally started blocking my Vogue cardigan, it's only been sitting around since Easter, that's the fronts and sleeves you can see, just the back left to do. I do have a bit of an issue with the sleeves, according to the pattern the measurement around the upper arm should be 11 inches, now I dont have Jennifer Aniston upper arms, but they're not bingo wings either, but mine clock in at 12 inches, I've blocked the sleeves to this and hope that they might give a little bit, or this cardigan could be winging its way to someone with skinnier arms than me. 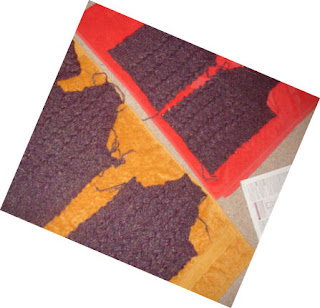 I've been spinning up the fibre that Susie gifted to me in the Knitters Treat Exchange. 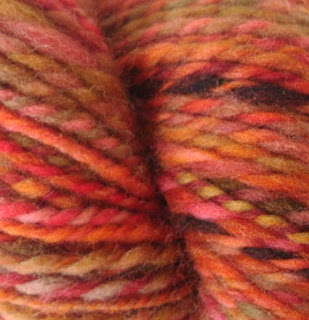 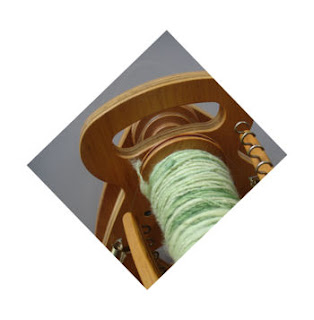 Something for the Weekend!

The postman came with a package from my SP10 this morning, and what a package it is. 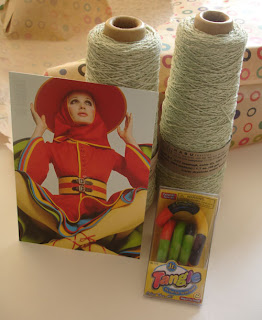 If there is one yarn company in the whole wide world that can always excite me to the point of drooling, Habu is it. I only saw their yarns for the first time last October at Alexandra Palace, but I was entranced with their tiny little balls and cones of silk and steel wool then, and still am.

So how lucky am I this week to get a package with two cones of 100% silk, in this fantastic shade of green, this stuff is very special, and will be taking pride of place amongst my stash awaiting a special project to do it justice.

This other thing you see is called Tangle, its a fabulous little thing that I haven't come across before, but great fun, you can just play and twist and turn, it's so sculptural, I've been trying different arrangements of it this afternoon, and seeing what kind of shapes I can make, seeing how tall I can make it, but keeping it balanced, just bending it around, perfect for fidgety children and restless knitters!

Thankyou all for your birthday wishes, it's been a bit of whirlwind week, and I'm getting to grips with a new laptop, which is very nice but I'm not really technically minded, anyway as you can see I have managed to upload a photo. Maybe that's not such a big deal but dh has updated my photo cropping programme, and it doesn't make as much sense as the old version I was using. I only know how to do certain things and end up with 3 different programmes running at the same time. My favourite programme for doing things is Corel draw, simply because they give you a sheet of paper, aslong as I've got that sheet of paper I know where I am, but if I'm in Corel and I need to crop something I have to take it to Paint Shop Pro, then take it back to Corel draw, computers can be so frustrating, or is it us, misusing them or not instructing them what to do that's the problem!

Anyway Mayday came with more sunshine and the postman bearing gifts from my Knitters Treat Exchange Pal, Suzie, this is a fantastic, well chosen package that Susie has put together for me. There are some really quirky ideas in Knitscene, and its not a magazine I have seen, there's also this beautiful handpainted merino fibre, and the 2 balls of wool, you're absolutely right Susie, you can never have enough wool, there's the junior mints, simple perfection, and how did Susie know about the facial scrub....I was trying some foundation with a Clinique beautician Saturday, who was telling me I needed to use a facial scrub and this Mint Julep arrives, I tried it out this morning and it does make your skin feel so tingly and fresh. 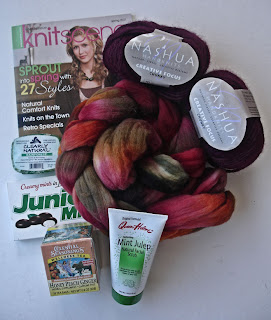 All in all it's a fabulous package and I've really enjoyed being part of this Knitters Treat Exchange, thankyou so much Suzie!