It's not often a whole week has gone by without a post from me, what can I say, I've been collaborating on a project in the garden, and although inbetween times I have managed to dye 800g of fibre, it's like watching paint dry...waiting for fibre to dry. I did get 200g of superwash bluefaced leicester spun, I was quite unhappy with the colour of the fibre, so I didn't take any photos, but now that it's spun, it looks completely different, and I really like it. It's just resting on the bobbins at the moment waiting for finishing.

On the knitting front I have 2 garments waiting for buttons, I have got the buttons ready, but I'm still dragging my feet, I'm ashamed to say!

Last Sunday was a much awaited trip out to the Lovebox Festival in Victoria Park, London.
1st up on the main stage were Nouvelle Vague, unfortunately after a great start, the girls went off stage and we had a couple of slow tracks, which was good, but they must have run out of time and the girls just came back on to say goodbye, quite disappointing.

This is 'Charming Steve' who was keeping us entertained between acts! You can read about Steve antics here. 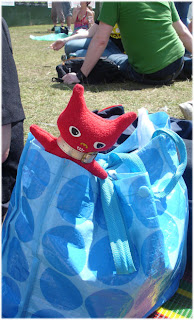 The big act of the day for me were Hot Chip who were on at the very civilised hour of 3.30pm, this is us waiting at the front. 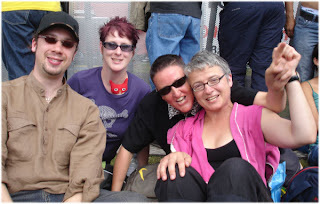 When they came on it was a bit worrying to see that there were only 3 members instead of the usual 5, but with a little help from an old friend of the band, they put on a fabulous show, and halfway through the set a fourth member put in an appearance! 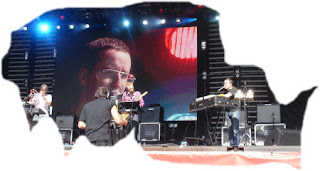 Later in the day The B52's played an incredible set on the Main Stage. It's completely surreal, 21 years later to see a band like the B52's, who were an 'art school' favourite, and still be able to Dance This Mess Around!

A great Summers Day out, and the sun shone too! 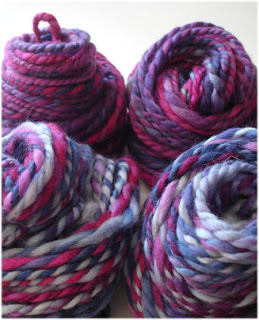 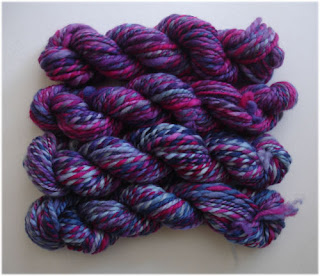 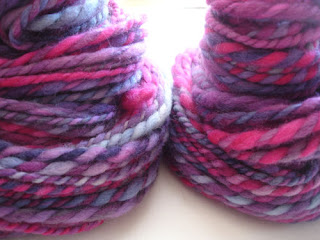 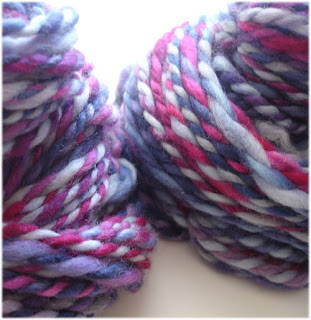 These are my 'cooked' muffins, all plied and ready to go, I love the way the two original co-ordinating fibres have turned into two co-ordinating yarns, the warmer set of two balls, and the cooler set with a bit more blue. This is a supersoft bulky yarn, one of the bulkiest I've made so far, at 6 wpi (wraps per inch).
Posted by Joanna at 3:39 AM 11 comments: 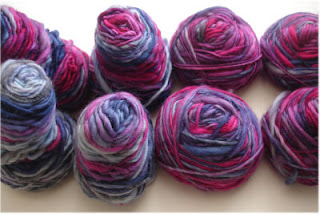 I've just plied all these muffins and as the sun was still shining I managed to get them washed and they're drying outside. 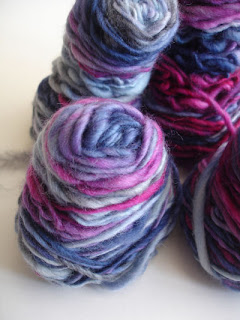 The fair on Saturday went very well, I sold 2 cushions, a bag and quite a bit of yarn. I met Tusa, and her beautiful happy baby Elizabeth. Infact I think Tusa was my first customer of the day, and she bought the Crown Mountain Farm superwash to knit a baby surprise jacket for Elizabeth. I was quite surprised to see my felted yarn dashing off my table too, so I shall be making some more up, and I was also asked about running some Spindling Workshops and 1 to 1 Tuition!
I do have a picture of my stall, well I will have, I happened to venture out with my camera minus the card, always useful, but my friend Erica did have her camera and took some photos and will be sending them on.

I have just put my name down for a small Craft Fair over in Rye on August 4th, I'm just off to flickr to print some moo cards, as things are going so well.
Thankyou to all for stopping by and making comments and for your continued support!
Posted by Joanna at 12:18 PM 6 comments: 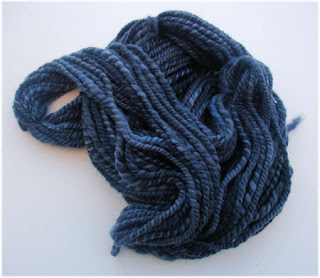 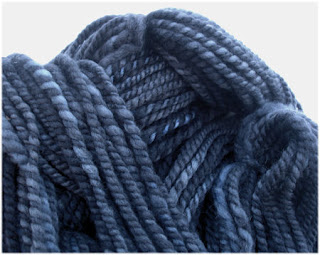 The light blues are actually much paler in reality, but my camera was having trouble with blues as always! 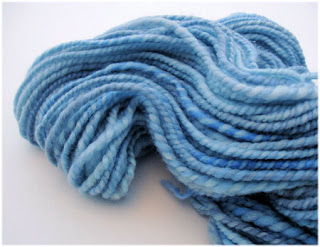 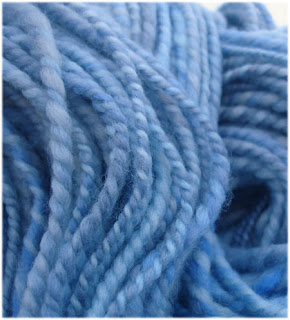 I finished weighing, measuring and labelling 33 skeins for the fair this morning, actually that light blue to the left is the same one as above all labelled and ready to go. 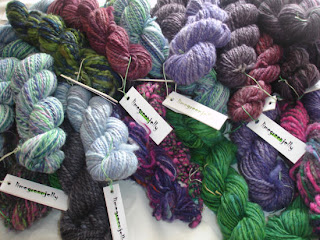 It's been a great exercise getting all of this yarn ready, I'm a bit lax about weighing and measuring as I finish yarn, so only 8 of these actually had cookie cutters attached, but from now on I will keep better records as I finish my spun yarn, and attach the labels. Also on the plus side is now I've got them all finished if they don't sell tomorrow they will all be ready to list in my etsy shop.

I am desperate to get my hands on this giant batt, but for the moment am havingsatisfy myself with just opening the hobby cupboard and taking a look. I love the mixture of subtle colours but especially that shot of lime green at the end. It's a merino/silk mix purchased from Winghams whilst at Woolfest. 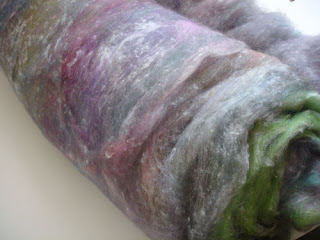 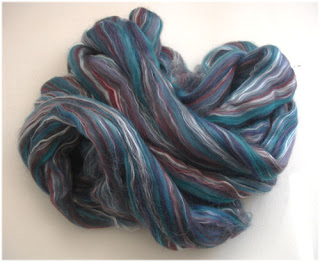 So everything is on hold this week, while I finish my homework, and prepare things for a fair in Worthing on Saturday. I did manage to finish a baby cardigan, and my friend Astrid finished sewing up my Vogue cardigan for me and has also offered to do any sewing up I need in future. I really enjoy the knitting but I don't like putting things together, she likes to see a project come together in the sewing stages. Both finished items are awaiting fastenings, especially the baby cardigan, I actually finished it at Knitjam last Wednesday, and the baby is a week old today. 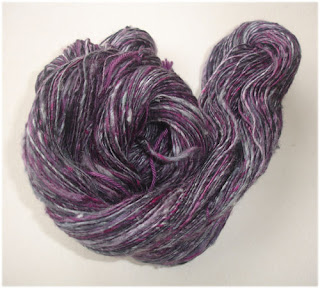 This is the silk hankies I had dyed here and was actually spun up and finished pre Woolfest, the black and white have mixed together to give it a wonderful silvery sheen! 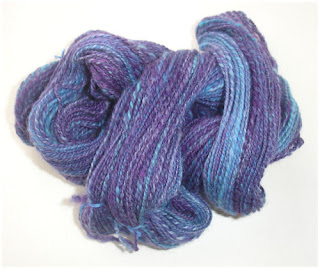 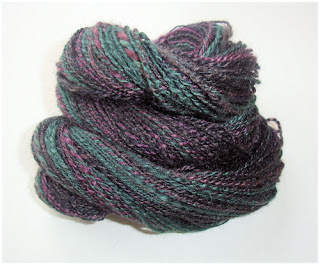 This is 30g of silk, again spun up on the baby Bosworth and plied on the Joy. It was lurking in my stash, from Ally Palace last year. I just wanted to try out spinning some silk fibre as oppose to the hankies that I've tried n the past. It's slghtly finer than the merino and therefore is about 116metres. I'm not sure if I like the colours though I've lightened the photos so you can see but in the actual skein it's more subtle, I just feel it's a bit dark, and dreary, especially for July. 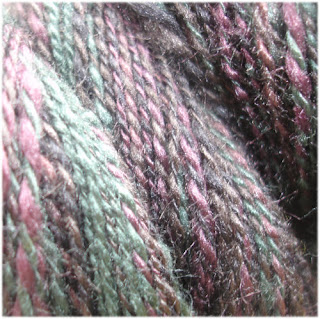 I'm now waiting for some Tussah silk top, that I dyed last night to dry. The scattered showers aren't helping. Where is the sun we were promised!

And last but not least my invite for Ravelry dropped into my inbox this morning, something else to do...but may help me keep track of everything eventually! 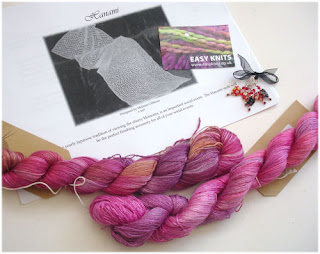 Yesterday morning the postman delivered my final SP10 parcel...and look at the lovely goodies inside, 2 contrasting skeins of Fiberspates laceweight silk, just the right amount to knit the most gorgeous stole pattern you can see in the background. It's called Hanami, and represents the yearly Japanese tradition of viewing cherry blossoms.

Just have a quick look over here for some close up photos of Hanami, it starts with a beaded cast-on, then the basket weave symbolizes the friendships and interweaving of our lives.

What a gorgeous and clever pattern, and a fabulous gift to end SP10! 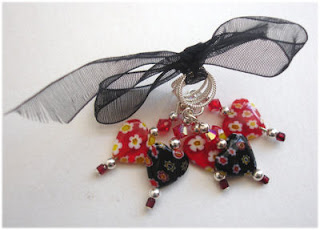 Mustn't forget these pretty little stitch-markers, and the best surprise of all is finally getting to find out who my secret pal is.....those keen eyed among you may have seen that nice little card in the picture, I'd like you all to meet Jon the Easy Knitter.

I really can't thankyou enough Jon, THANKYOU! you've made my first venture into SP very special, they've all been lovely, well thought out gifts, I can't wait to cast on the Hanami, but need to finish a couple of commissions before I do. I do hope you've had fun picking them and I havent been difficult to buy for. I'm going to enjoy observing your venture's in spinning, knitting and dyeing, now that I know where to find you, and I'd really like to come and visit the I-Knit group one day, just to say hello and thankyou in person. 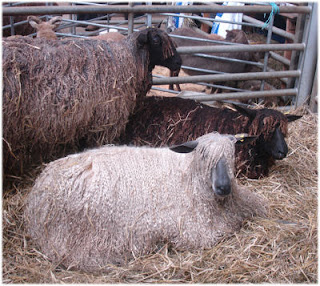 Thursday saw us drive to the Lake District for Woolfest, we arrived at our secret * B & B destination at 4.30pm, it was raining about as heavy as I think it could and you couldn't help but think of other bloggers coming up who were camping, because the weather was horrendous. 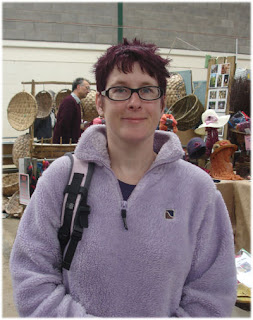 Friday I spent my first full day at Woolfest, quite alot of the time I felt like I was walking around in a daze with so much to see, and do. My first purchase was a 2nd hand Jumbo Flyer for my Ashford Traditional.

I obviously bought a little bit of fibre, it was my first chance to see and feel different breeds of sheeps fleece, and I came away with a little grey Shetland, which was baby soft. I chose some pick and mix colours from Wigham Wool, and bought a huge multi coloured batt of merino/silk. I bought some alpaca noil, just for blending and some rugmaking tools, a prodder and a hooker! Some bags of sari silk waste, again for blending and some stripey merino silk roving.

I also had a go at 'Longdraw' spinning with the Guild of Longdraw Spinners, something that will take a bit of practice quietly at home, not at a big fibrefest with people watching!

I also bumped into a couple of other bloggers for the first time, I recognised Celtic Memory Jo, from the photo on her blog, she just happened to have an armful of cones at the time! I also saw Ambermoggie, Wye Sue, and Woolly Wormhead struggling to get around, not because she has a poorly leg, but because everyone kept stopping her in her tracks to chat!

I also met a few new people at the Spin-In Friday night, I met Freyalynn, and I sat with the Eden Valley Guild of Spinners Weavers and Dyers, who were very welcoming and friendly. 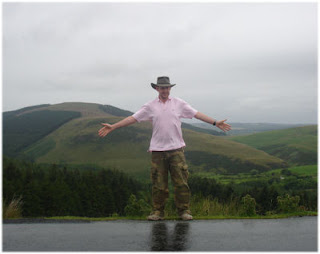 Saturday morning started wet again, and we set off for a drive around the surrounding area, to take in the scenery. We got all the way down to Sellafield, the site of the Uk's first nuclear power station. It had been raining quite heavy all morning but just as we arrived and decided to have a look around the visitor centre, it got even heavier.

We drove back to Cockermouth and dh decided to go back to the B & B, I decided to make second visit to Woolfest, and made a couple of extra purchases. I bought some lovely sockstuff from Freyalynn, and a Bosworth featherweight spindle, I'd seen quite a few people using these top whorl spindles, getting them spinning on they're thigh and decided to give it a go. 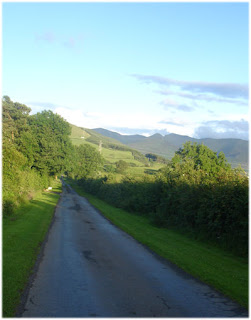 Saturday evening was dry and Sunny and we took some photos on the way back to our B & B.

* I'm having to keep our B & B a secret, because I would like to stay there again for Woolfest 2008, shhhhh. 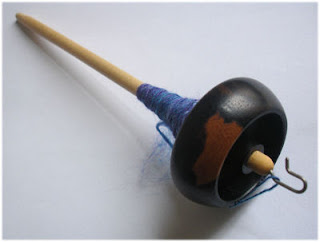 This is my Bosworth, I've been spinning a little merino laceweight, but I have also bought some Tussah silk to dye and spin, just wish it would stop raining!
Posted by Joanna at 10:49 AM 10 comments: