1st up we have 2 scarves done on the same warp in Texere wool silk, which is quite rough and breaks really easily, although I can get it on the loom ok. This is May's projects. 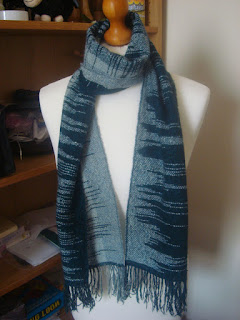 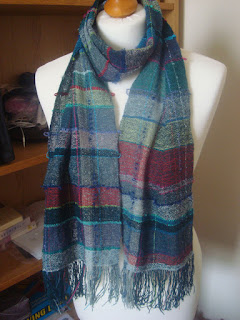 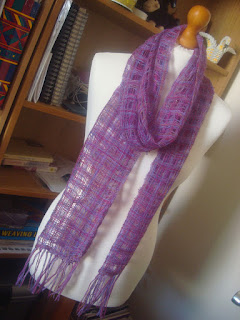 These 3 spaced warps are June's projects. I also did 4 lavender bags with handwoven fronts yesterday before I went off to a fair at the local hospice, but they all sold before I'd even thought about taking photos.

I took Ruby out to the Hospice fair as they wanted me to do a public participation thing at the event, I decided the easiest thing was to warp something narrow for a banner and had the bright idea that they could hang the banner at the Hospice. I did try to get hold of a ready made warp but there weren't any available so I wound this in black with some brightly coloured cottons. It was 10m, I didn't know how much we would get through in a day. Turns out only 2.5m, but you wouldn't want to run out, and that leaves me a little to play around with.

there are some close up shots in my Ravelry projects here
Posted by Joanna at 1:11 PM 2 comments: