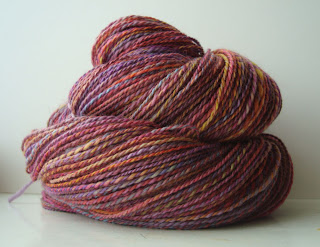 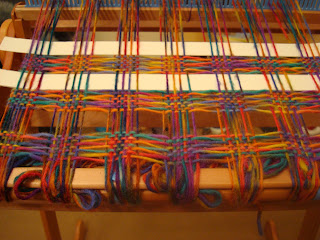 I bought some Wash and Filz It Fine Felting Wool for this project, although next time I will use some handspun! I didn't have time to get much weaving done before Christmas so this was the first project off the loom this year! I have got some pre wash photos but it really needs a little blocking and a photo shoot to do it justice. Something to show when I get round to it!
My knitting mojo went a bit AWOL last year so Christmas was approaching and I decided it was time to get knitting that sweaters worth of scraps yarn I have...so did a little swatching and cast on....the rib was too sproingy so I recalculated and cast on less stitches....I knit and knit and knit over Christmas....tried it on a few times got as far as the armpits and left it in the naughty corner for a bit....decided I didn't like it and finally frogged it after a second opinion....I then spent days looking at patterns on Ravelry (again) and started knitting a top down cardigan...following a pattern that was written for a heavier yarn at a different gauge, bound to be a winner (not).... but that isn't working either. In the mean time I would really like to be knitting something.....so I'm knitting a Mizzle for Clare at Nimu with some yarn she has sent me....so she can display it at shows she is attending this year.....I cast on last night, the yarn is her new silk and baby camel, it's gorgeous!
Posted by Joanna at 3:20 AM 2 comments: