Tuesday afternoon and all the fibre is labelled, packed and ready to go!

I haven't had much time for knitting or spinning over the last couple of weeks, but now that all the dyeing is done I've been casting my eye over my knitting projects to pack....but nothing really is that simple.

Take project one....some handspun silk with beads threaded on being knitted in a freeform manner into some kind of scarf.... 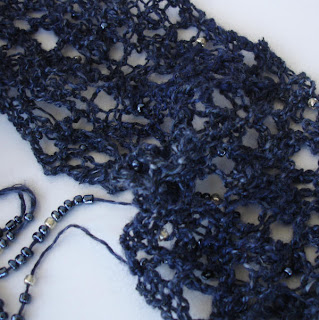 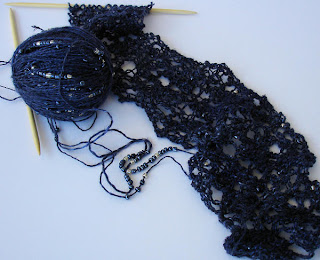 It's quite mindless...in fact it's almost so mindless it bores me senseless, but will look pretty when it's done!

My Swallowtail, I had knit the first 12 rows of the Lily Valley Border, but had to frog back to my lifeline, and it's a bit too full on anti-social knitting, so not suitable for Woolfest. 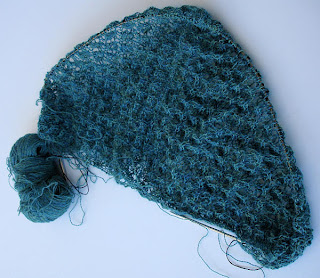 Ahhh yes project 3, cast on at Knitjam last week! I had 200g in one colourway and 200g in a very similar colourway I was saving for a bigger project and decided it would be great for a handspun Clapotis....except I spun some in a hurry without displaying due care and attention and ended up with 2 skeins of overspun singles, 1 is ok and I've got one left to spin!
...slightly chunkier than I really wanted but I am knitting on 5.5mm needles only .5mm larger than normal anyway...and it looks and feels ok.

I just wonder if the slight bulkiness of it would work better as a scarf, but when I knitted a small piece and did the drops it just changes the whole appearance of it....you know me I just don't want to spend a couple of weeks knitting on this and frogging it back, although I have just put in a lifeline at what I would call scarf width, so maybe that is exactly what I am going to do!

I estimate it will be about 16" wide...and am estimating if I used all 4 balls it would be longer than 68" so quite long enough....but do I want to knit it wider and shorter...so more of a wrap..or do it this width/length....I just can't decide. 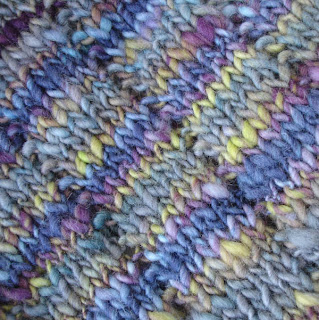 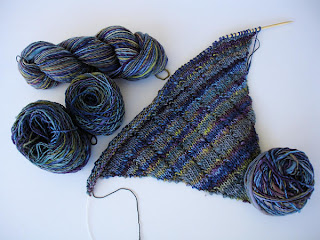 Option 4....I have wanted to knit Lizard Ridge for a long time...my favourite blanket is in tug of war between the cat and the child on a daily basis..so a gorgeous afghan just for me is just what I need, so yesterday I picked up a ball of Kureyon at the LYS.
I thought I could just pick up a ball and knit on it now and then until I have enough, no pressure!

I usually like 2 projects on the needles....but if I cast on a square for LizRidge that will be 4..aaarrgghh WIP anxiety, this is just as bad as having no knitting on the needles and stressing over not having anything to knit! 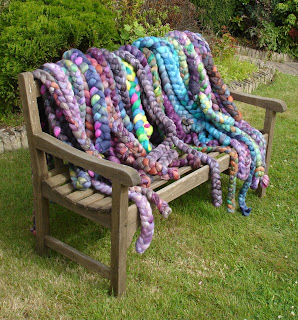 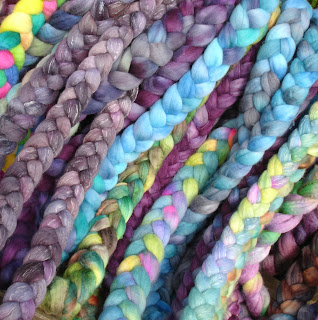 Thankyou for all the lovely comments about my clapotis! It feels like this merino/angora was hanging around on the bobbin for ages, but I knuckled down over a few nights last week to get it finished and plied.

I may well have some merino/angora in the 'too spin' pile this week, I came back from the dentist Tuesday to find the cat had taken a fancy to some which was hanging on the airer in the sun...it's no longer in saleable condition, but still spinable. She has never really been bothered by it before, but she was in a funny, playful mood, and we think it may be because the breeze was just blowing it a little!