To Infinity and Beyond... 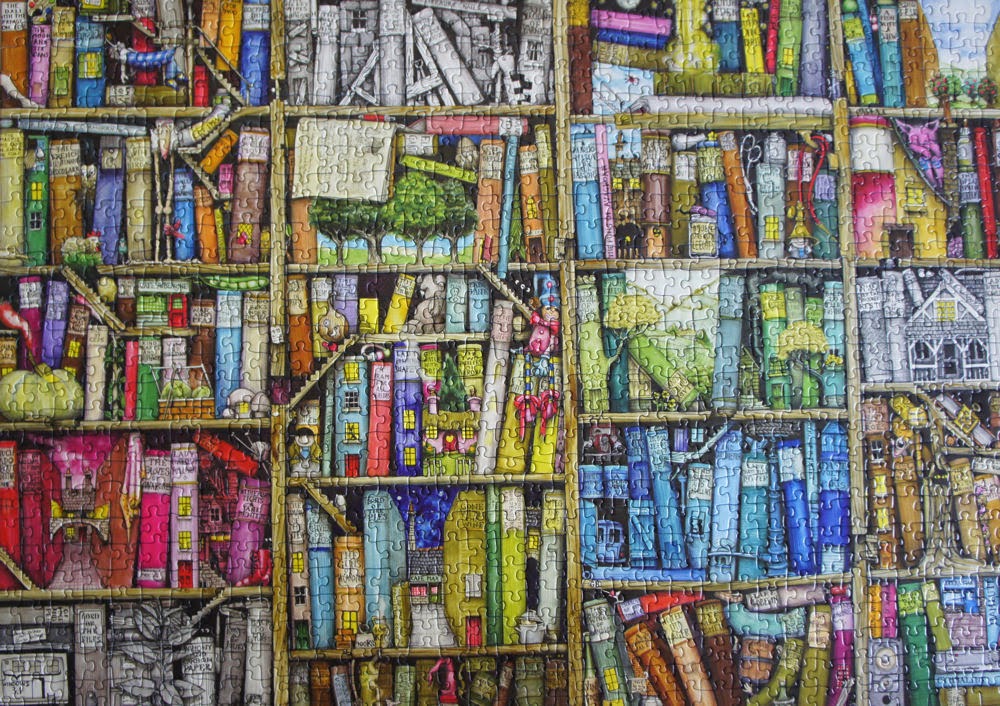 Spring has definitely sprung and I distracted myself from my knitting with this fabulous puzzle called Bizarre Bookshop. I just loved the illustration so much when I saw someone else show off a picture of it that I had to have it and the littleun is now big enough to know not to throw puzzle around. Infact he's quite into doing jigsaw puzzles himself so it's a winwin situation! 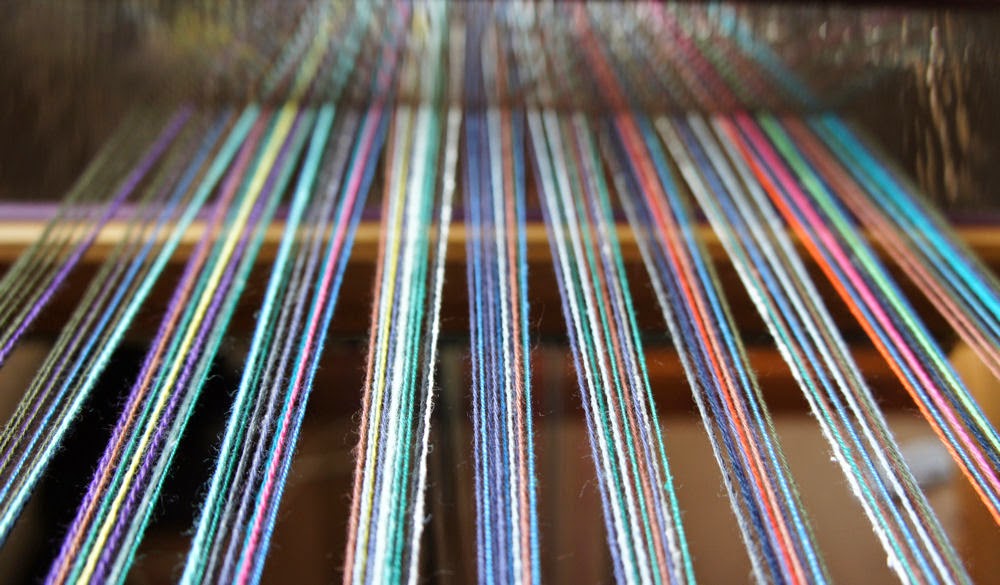 I put a new 'generous' warp on the loom to make some more cowls and do a bit of sampling!
I have some colcolastic which I wove into a sample and washed. I like the sample and the effect was ok, I just thin it would be better with finer yarns. I can get a similar but not so elastic effect by throwing my weaving into the washing machine and forgetting where it is. 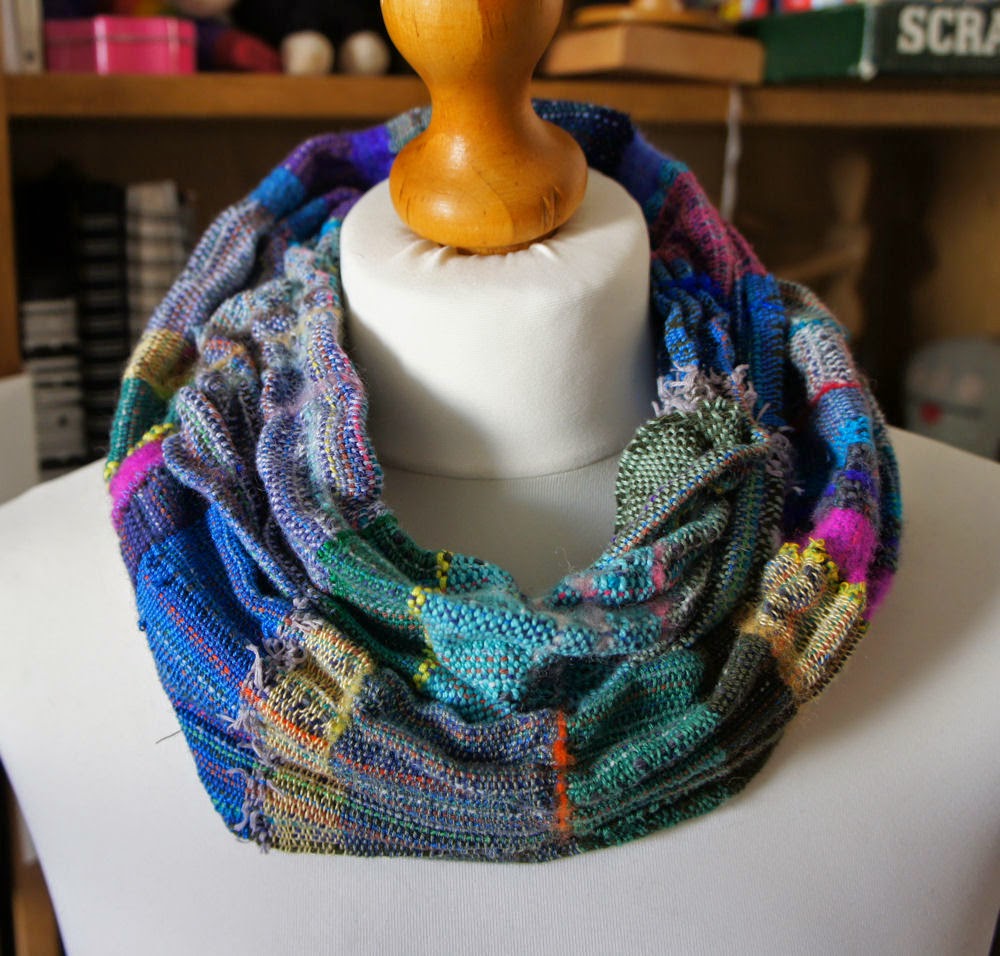 This is the first off the loom. What I like most about making these Infinity Cowls is they are shorter than a scarf and I can really just play with colours and textures endlessly in this format, well until I run out of yarn, (yeah as if that's ever going to happen!) 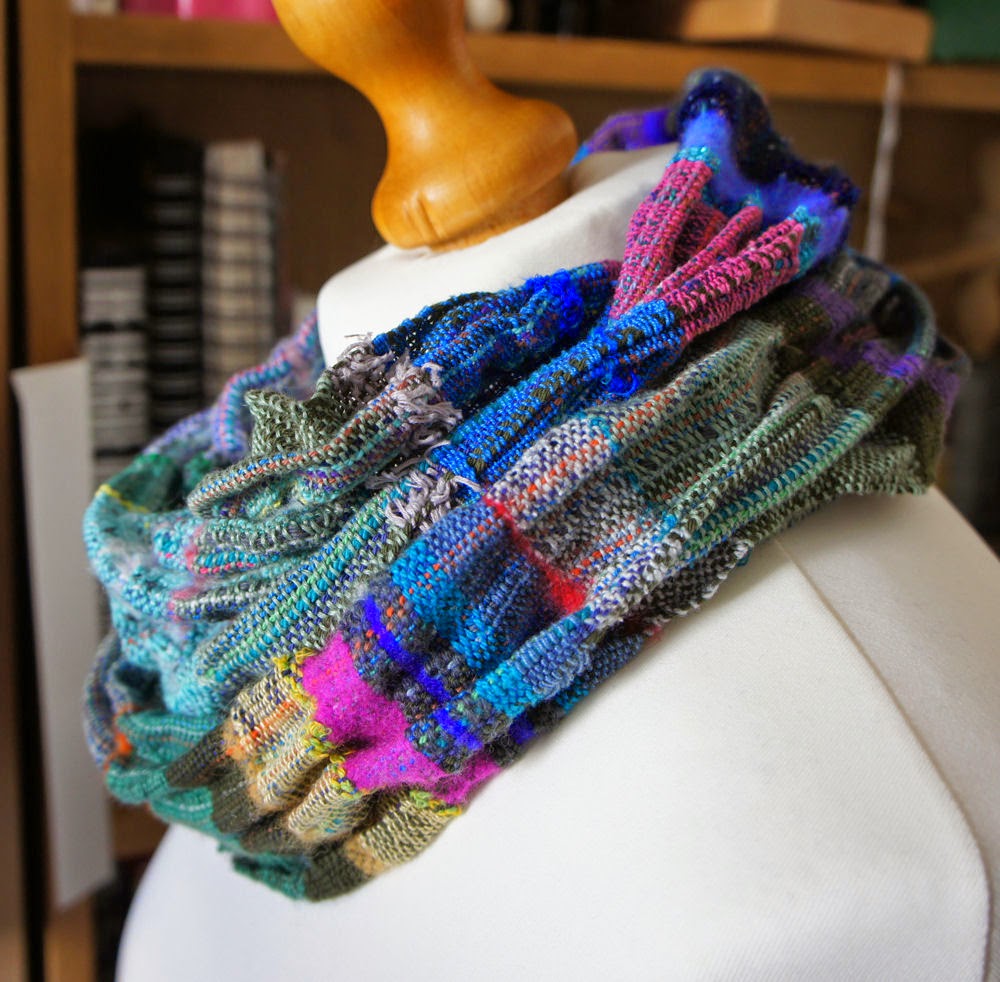 The knitting has been slow, maybe because I have 2 projects on the go now! The mittens (Jazz Hands) have been progressing very slowly mainly because my gauge was off, frogged, the cast on was too curly, frogged, the colourwork was interfering with the thumb increases making them look ugly and weird, frogged thumbs...twice...it's a case of two rows knitted one row frogged, but I do love this yarn and pattern (apart from the thumb) and I will hopefully have a new pair of mittens, just in time for next Winter I expect!

As for cardigan knitting, I'm still on the sleeves (2 at a time) and it seems I'm on a go slow as I just haven't been sitting still watching tv that much.
Posted by Joanna at 2:39 AM 4 comments:

Story of the Blues! 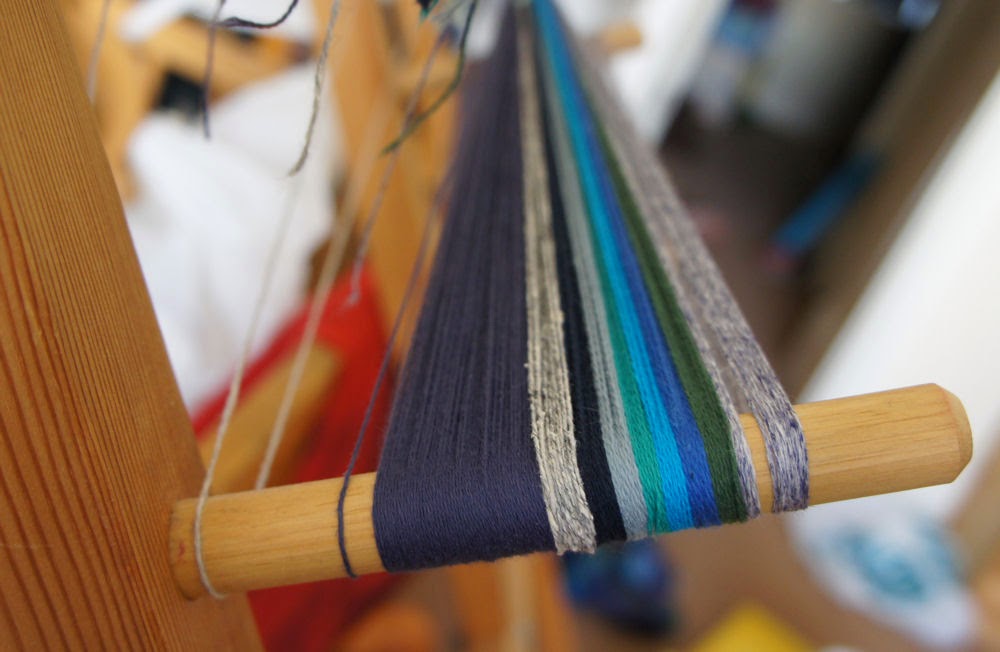 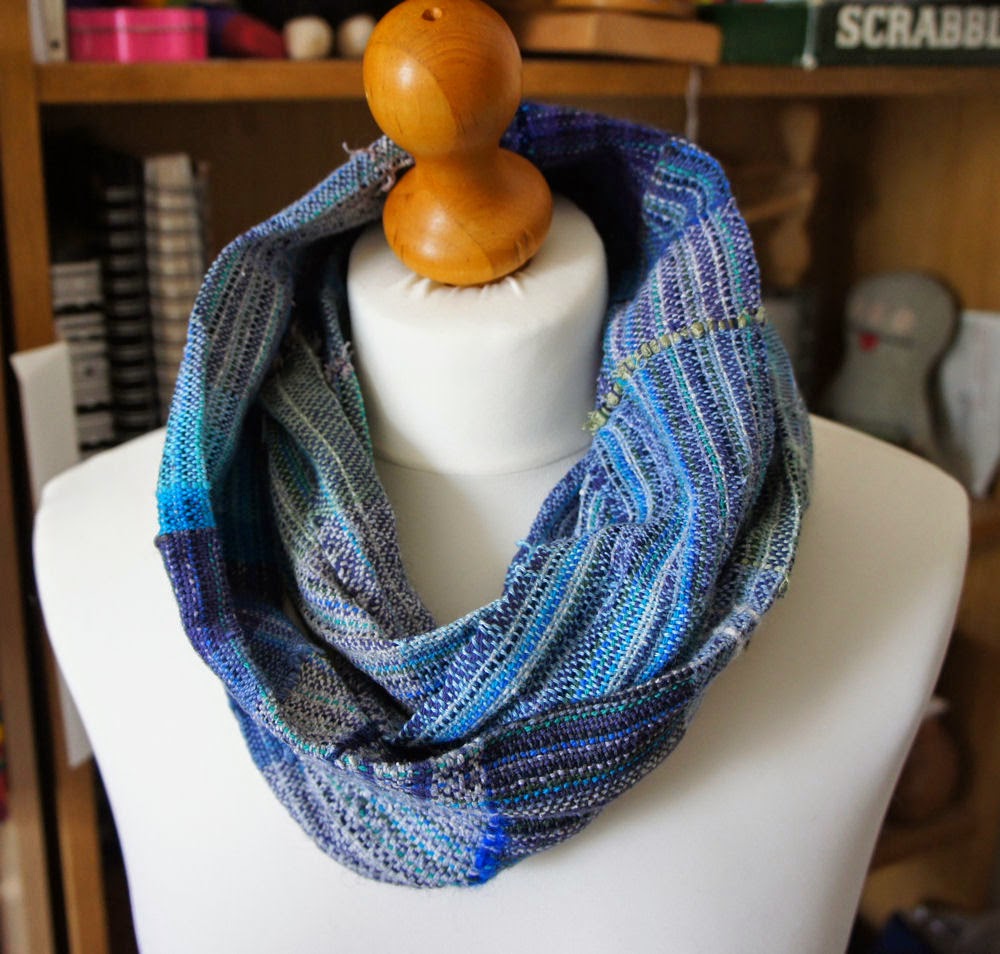 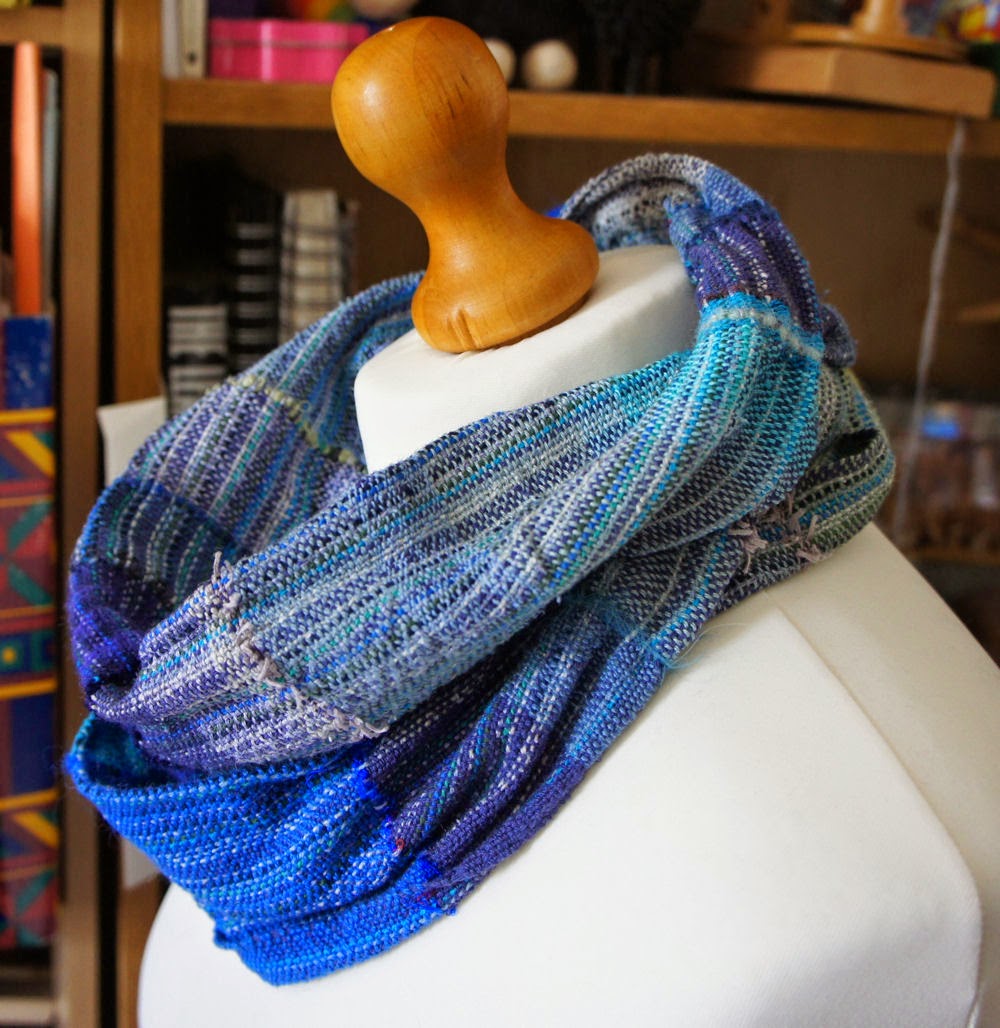 Last Thursday I made a new (mainly) cotton warp with a small amount of linen for a new cowl. I thought I had made extra warp to sample, I have some small bobbins of colcolastic I wanted to play with but as I was weaving I could see the warp was shorter than I thought I had put on, infact apart from loom waste this was just the right size for another cowl (at least I got something right). I gathered my box of yarns Monday and started weaving, I was enjoying the process so much I finished weaving Monday night and grabbed the sewing machine out right away to finish off the edges

In other news, thanks to Game of Thrones,  I have managed to finish the body of the cardigan I am knitting and  am on the sleeves. I'm now trying to catch up with Fortitude but have also now cast on my Jazz hands mittens.