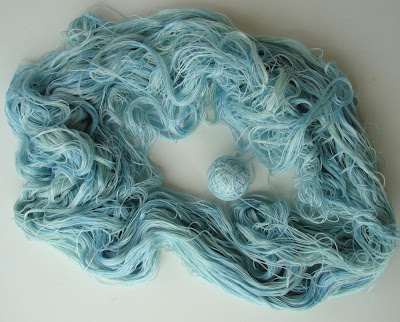 There are lots of bitty things happening at freestylefibre HQ at the moment.

I've been knitting on a secret knitting project, for the limegreenjelly secret santa swap, so since it is a completely secret swap, unless my swapee guesses it's from me, you won't get to see the knitting anyway!

I'm also trying to spin some yarn to knit a hat, before the weather gets too cold. I can't find my old faithful stripy hat anywhere, and yes, it is about time I knitted one. Especially since I've found an ideal pattern in the Fall Vogue (edited to add ravelry link just for big sis Marianne!)

My Swallowtail did have a few more rows knit, until the secret knitting jumped up the queue. I've also got a scarf on the loom.

So why oh why did I decide I needed some more lace in my life? I have had the yarn for quite a while, a few months ago I found the perfect colour mother of pearl discs, and so I thought it was time I purchased the pattern (Hanging Garden Stole) and wound the skein into a ball in preparation to cast on. Unfortunately the skein had other ideas, it wound fine for a little bit and then it just got caught and wouldn't turn on the rice any more.....I could be untangling for a little while!

Just to make life a little more interesting I have decided to open a second etsy shop for handspun yarns and other creations, it's called freestylefibre. Actually I have been planning to open freestylefibre since June, I just had to put aside a little time to get a few items in there!
Posted by Joanna at 10:49 AM

Oh Jo, I feel for you sweetie, that's happened to me and it felt like it took forever to untangle and most of that time I didn't think I'd ever get it straightened out. a big whump.
BUT... you'll get there.
Which hat pattern are you going to knit? curious minds and all that ;^)
Going to check out your new etsy shop, full of your handspun yarns, I know they'll be beautiful, they always are.
lots of XOXOXOXOX

Congratulations on your new shop! I loved your Raven BFL, and I have to say I'm very tempted by your Jelly Legs! (might have to get myself an early Christmas treat)

So sorry about the laceweight. It's just a nightmare, I know.

True confession time - I give my tangles to my mother to sort out. There is a detangling group on Rav you know, cross their palms with wool and they'll sort it for you.