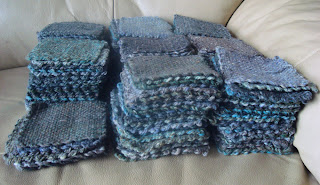 I am now putting square 250 on the Weavette.  I am aiming for 272 squares for a blanket that's 17 x 16. I still haven't chosen a colour to join them with or attempted to crochet any together. I try to tell myself that by the time I've joined 272 squares I'll be an expert, but I don't really have that much belief in my crochet skills. I'm not sure how long it's going to even take to join that many squares, watch this space! 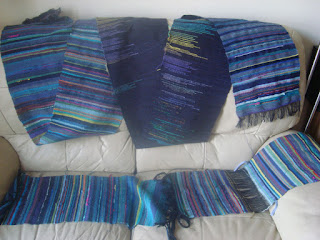 I finally knuckled down and finished the 6m warp on Ruby (my Saori loom). I think I finished it off New Years Eve and New Years Day. Not got any definite plans for it at the moment, just vague musings for the time being! 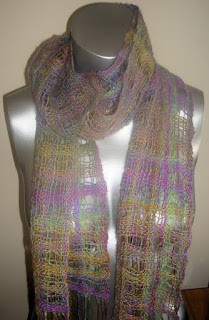 So January arrived and I decided not to leave Ruby standing idle, but what to weave. I dug through the stash and found this handspun merino/angora/silk. There wasn't alot of it,(200m) it was spun back in 2008 and was actually dyed by Freyalyn. I hadn't taken delivery of my warping board or cross holder so I decided to keep it simple and work this yarn into a spaced warp scarf. I used an upright lazy kate as a makeshift cross holder and the actual warping, tying and weaving went painlessly. I did a little hand fulling (doesn't take me long to get bored of it) and I'm pretty happy with the way it turned out. 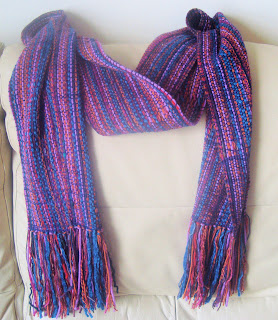 Spurred on by the success of the spaced warp scarf and seeing a 7 Warp Weavalong in one of the Saori groups on Ravelry I decided I would give this a go, still without the warping board. I picked seven yarns from a bargain bag of part balls that had followed me home the week before. I then proceeded to make the warp holding all 7 yarns at once....this was probably the first mistake, then I didn't tie it properly and lost my cross. It was only a 3m warp so I decided to battle it out and get it on the loom.  Infact the whole thing was a battle, I had issues with tension due to the way the yarns were going in the clipping rod, some of the yarns were slipping and others were too thick, I also had tensioning problems with it on the loom, all part of the steep learning curve. There were times I thought I might have to give it up, cut it off the loom and chuck it in the bin, but I do have a stubborn streak and a waste not want not attitude.

So what does February have in store? for starters more squares,  if I can manage 3 squares a day I will have almost reached my target by next weekend, and warping Ruby for another weavalong in different Saori group. Then I'm going to tackle the handspun cardigan scraps yarn again. A wise woman has told me to set myself 5 goals, if I complete the 5 I can have 5 more....they are not quite set in stone but top of the list (obviously) is to finish The Blanket of Perseverence, 2 is to make the Handspun Cardigan. Other projects are floating around the grey matter at the moment but one thing I would really like to achieve this year is some handmade clothing, whether it be woven, knitted or sewn.
Posted by Joanna at 2:35 PM

You HAVE been busy. I love the little woven squares. Did you make your own little frame to weave them on?
All the scarves are beyond lovely.
Onward and upward!
love you xoxox

ugh, that 7 warp project sounds like a mess. I once tried measuring 4 warp ends at a time and gave up when they all got tangled, in spite of the cross.
I love the idea of five goals at a time. I'm with you on making some of my own clothes this year, woven and knit. :)

The woven square blanket will be wonderful and, crochet - you'll do great with it!

I admire your stamina, I put together a five by five cushion in 2007. I still haven't put together the other bag of twenty five squares for the other cushion. I can't imagine being faced with 272

Good luck with the blanket it looks lovely! I love the spaced out scarf so light and delicate