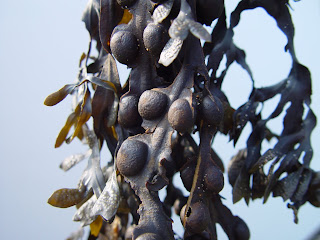 Is 2008 the year of the frog? It is in this house, but I keep reminding myself its all part of the learning curve.

It started with Rosedale United, I knitted the neckband the week before New Year actually arrived, and frogged it and knitted it and frogged and knitted at least three times, I then tried it on, and the raglans weren't in the right position for my arms and basically decided to start 2008 with a clean slate and frogged the whole thing! Its all labelled and ready to be knit into some kind of a raglan sweater, but everything is on hold this year.

I have decided that the Handknitting course needs my full attention, so for 2008 it has become my top priority. This doesn't mean I won't be knitting because the course (obviously) involves knitting, it just means that I have to be strict with myself about what I knit and concentrate my efforts into designing, swatching and producing the 2 garments, 1 accessory and 1 item for the home, that I need to pass this course, and some of the time it may mean I don't have alot to show for it. Although that said I will have non college knitting on the go...I've just decided not to try and tackle anything that needs alot of commitment...like a sweater, and stick to small items like mittens, maybe some colourwork handwarmers, experimental felted pieces and bags.

Of course I will still be spinning, I don't think I could stop even if I wanted to!

So on the needles at the moment is a Rowan kidsilk scarf, which I'm going to be felting in the washing machine and I'm working on my first design piece which is a scarf based on seaweed.
Frogged this week: I had a 50g ball of Noro Cash Island to knit a sample for the seaweed scarf project, gorgeous colour and velvety soft, but it didn't have the drape I envisioned so I cast on for Luce. It just didn't have the right drape and feel either. 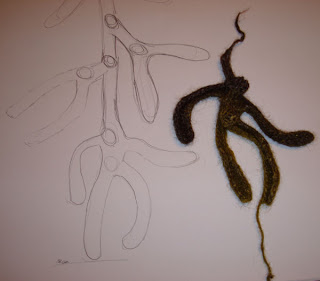 Oh I just had a big flash of inspiration then, seeing your seaweed.

Hope all goes well with your knitting course, sounds like fun.

"....knitted underpants for the boys...in something itchy?? Lol"

That's not silly, that's downright nasty, but I throw my gauntlet at you (and runs) I shall take the challenge.

love the little seaweed man Jo..good luck with all that you do, the course sounds like fun to me!

Enjoy the course, and I'm sure we will enjoy hearing about the design process. :)
I love the seaweed and can imagine it on seaweed socks or a mermaid shawl...fantastic!

The seaweed concept delights me! I hope you find just the right fibre for it... perhaps it's something in your fibre stash waiting to be spun? then knitted?
Year of the Frog... I just frogged a hat last night and started over and lo and behold... I didn't forget about those 'knit rows' stuck in between the 'increase rows' the second time ;^) heh.
(and such a simple thing!)

I REALLY like that seaweed! Can't wait to see more of it develop!