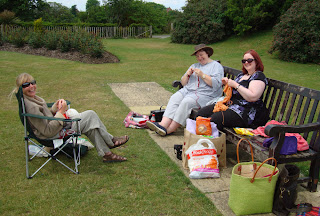 As it was Worldwide Knit In Public Today we arranged a little meet up in Princes Park, Eastbourne. I thought we should mark the occasion by casting on the heel of Bigsock.  That is Becks on the folding chair casting on! Also in the photo is Lesley (in the hat) and Lou. Obviously the empty space is where I was sitting, I think Lesley will have a similar photo with me in it!

We decided the simplest way to work the afterthought heel for Bigsock was from the inside out like a toe, although rather than a closed cast on we have 500 sts cast on into a crochet chain which we will graft later on. The plan is for this part of the sock to travel the UK.  Germany are going to be casting on the toe and we can then be working the foot between us!

I finally got past the short row heel on my little Leyburn sock, after 6 failed attempts for one reason or another. I think the first time I wasn't paying attention with my wraps....a couple of times I got a stretched stitch I couldn't fix, then I got further up and realised that the leg was going to be too big, once when I frogged back I didn't check the position of the heel and foot stitches and was a stitch out, another time the foot was too long, then I knit it too short,   but on the bright side I am very pleased with how my handspun has held out after all that frogging and re-knitting.

I'm not that far off finishing the first sock now, maybe a few more inches and just weighed the ball of wool to see how it is going....I have 110g on the scales which means so far I have only used 20g! I think I will check again when it is cast off!
Posted by Joanna at 12:54 PM

What a lovely park!
I giggle (in a very good way) every time I think about The BigSock! and what a fabulous thing it is.
Heh, it took me several goes to get that short row heel to come out decently. I'm hoping that some recent spun yarn will be enough for socks because I see all the socks from the homespun, they're SO so very beautiful! XOXOX

oooh it's looking very smart in here. Good luck with the Big Sock.