There has been a bit of a delay finishing the Booga style bag, firstly I ran out of black yarn and was waiting for a ball to arrive just to finish the strap off, then yesterday I was hit with an i-cord catastraphe.
Its not called Idiot cord for nothing! Any idiot could just leave it lying around on the sofa in the living room for days as she works a little more every night, until disaster strikes, the little imp who inhabits my life came running into the dining room yesterday after completing many laps of the said living room, unfortunately he had liberated my i-cord from its happy home on the needle first and the almost completed i-cord was frogged back to a foot in length, instead of the almost completed 5 feet! 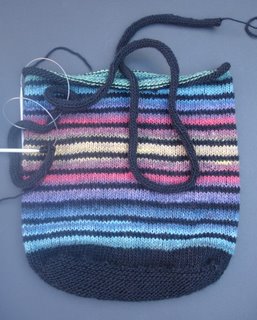 Not to worry though, the 2nd Tuesday every month is Games night and I took my knitting along with me. As we settled down to discuss what we were going to play I started to re-knit my i-cord.
We had a game of Jenga, moved onto a few rounds of Boggle and then a game of Scrabble. I could knit and play Scrabble at the same time so by the end of the evening my i-cord is back to its former glory... this is my pre-felting photo. Whilst I was at the bar purchasing a drink one of the other girls Ivy got talking to a bloke and he was asking what I was knitting, Ivy told him I did martial arts and that I was knitting a black belt! 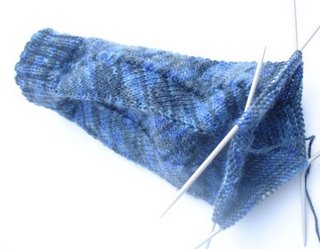 I have been making steady progress on the Jaywalker as you can see, I think it looks like a blue fish in the photo, but the colour is closer to what I'm actually using.

Loving that bag! It's going to be quite fabulous felted. Oh and hey, loving the Jaywalkers also! You take such nice photos, seriously. I really really really like that yarn. Verra pretty.
Little imp, indeed, (grinning ear to ear here).
Game night? Sounds like fun.

Ack! Definitely an imp that would reduce 5 feet of idiot cord to 1 foot. I love the bag though. You have some really nice photos too.

Ahh.. the joys of kiddlets and knitting !!
Love the colours in the bag
I have only felted one thing (ever) (french market bag ) and i was so nervous the whole time .
Thankfully it worked beautifully