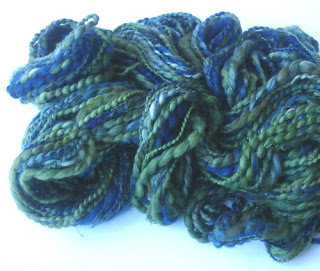 I started spinning this new yarn last Sunday, I've decided to call it Whirlpool, its a merino, alpaca and cut silk mix, plied with a rayon thread. 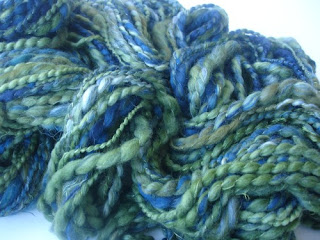 I've also been invited to join The Weekend Whirls, a group for spinners, soWhirlpool was aptly named for my first posting over there.
Initially I couldn't come up with a name for the yarn...but felt compelled to name it. On the flipside I was thinking it doesn't need a name, its just yarn, you don't need to call it anything. 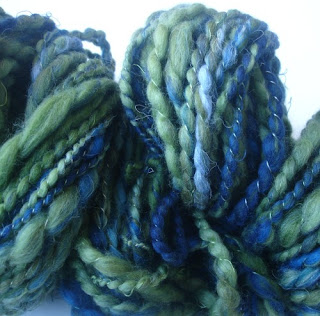 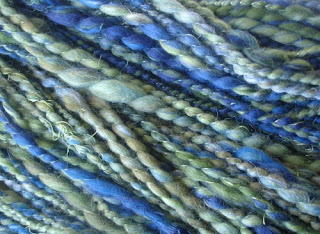 The blues and greens were still asking for a watery title, I even tried hanging it from the ornamental fountain in the garden for photos, but cascade or waterfall just didn't fit. I do believe the yarn starts to speak to you as you spin, some of the other skeins I've spun have whispered to me or a picture has come into my head. Although apart from asking to be named, I only have 120g so this yarn is asking for a small project.

It seems slightly ridiculous to me that I havent actually knitted anything with my handspun yet...although I've come to realise that I don't 'spin to knit'. I was very interested in Anne's question about Why Do You Spin over at The Weekend Whirls.

I spin because I love to spin. It fills some craving deep inside me, mixing colours and textures to create something new. At the moment I am feeling my way around different techniques, which is why I like to make small batches. As an artist there's almost a battle between making a yarn practical and pushing the boundaries into new territory art yarns, and I'm still in the experimental stage, but always my main adversary is finding the time, but I firmly believe weekends are specially for spinning, and weekdays too!

This one is completely gorgeous... maybe soon you'll be tempting me into knitting again...

Mercy. I had to kick-start my heart, catch my breath...and the drool coming out of my mouth all at the same time. Talk about multi-tasking!
Heavenly Whirlpool, that's what I'm calling it..or Divine Whirlpool, or.....you get the idea.
It's stunningly beautiful!
Gretchen REALLY needs to see this.

It is a fab yarn and a great name too. . I agree that some yarns do call for a name and its only when I dye it that it comes alive for me , I was going to name my dyed striped sock yarn 'Rasta' !!
Isn't spinning creative & such fun for whatever reason we spin the yarn for:)

Like seeweed and ocean blue... I can feel the taste of salty water on my lips... nice!

oh wow Jo...that's just gorgeous. I think that you must start making things with your delicious yarn. here's the link to that fab fabric place that sells the vintage patterns too:- http://reprodepot.com/ I'll be ordering from them soon, I have spent ages browsing their fabrics, the prices are so reasonable too.

I also found a brilliant website with video tutorials about spinning on it. She demonstrated a free standing brass spindle with a ball bearing thing for the whorl to sit on...I want to buy everything!!

Gretchen sees it and is completely speechless. I absolutely love the colors and the way the spun texture moves it all along. So very lovely.

Those colors are wonderful. I'm prone to blues and greens, anyhow, but the combination you caught in that yarn is stunning!

Fabulous colours , and I love the name too.

Oh you know...had to come by and drool over the Whirlpool again.

I love the colors. That is some lovely yarn you've created!
--Your Knitters Treat pal