Ok first things first I did remember to do the drawing for my little promotion competition, there were five people entered into the hat (Pat, Peri, Lorraine, MUK, and Jill) and Neo pulled out Peri! I'll be having words with you Peri about what you would prefer for your prize!

I have also joined the ABC Along on Ravelry, and I see D has just been posted so I've got a little catching up to do! 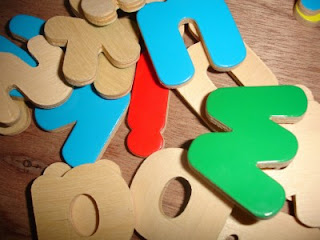 A is forArt Knitting! I also joined the Art Knitting Group over on Ravelry, and it was nice that after uploading photos of this piece to the group that 3 people marked it as a favourite. 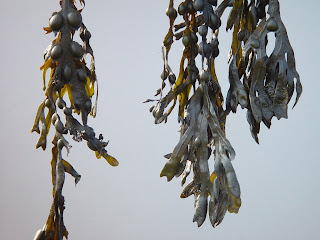 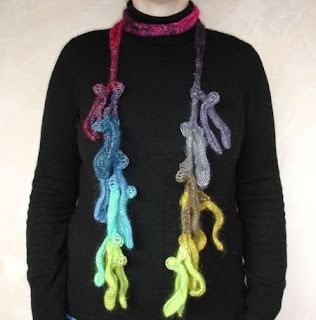 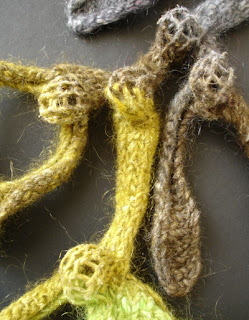 This is the finished object I promised, the Shibori Seaweed Neckpiece, I just need to write it up and make a folder with all the related artwork and sketches in and my first course piece will be ready for assessment!

Technically it's ok, the hardest calculation with felting things is a small sample will felt differently from a larger piece, and so even after the swatching and felting that I did in the first instance the final piece didn't actually shrink in length quite as much as I expected, and I've found that if I wrap it around my neck twice that I prefer the shorter look of it, but that's all part of the learning curve!

I do like the seaweed itself, and think it would work quite nicely around a felted bag, a bit Noni like! Maybe a future design idea!

Cool! The seaweed scarf is Very Cool!
How did Friday go? lots of fun?
XOX

I love the seaweed, I think it would look great on a crocheted string bag too. Just realise who MUK was lol....now who could have told you that? ;^)

I adore the seaweed scarf so original - great colours too!!

I'm smitten. I would add this as a favourite over on Ravelry, only then you might work out who I am! I've been spending today making something that I plan to felt and send to you.

I think it's stunning and I love it, and I'm gonna have to make one of my own!