I was attempting to copy and paste the lyrics to a favourite Hotchip song called Colours here, but I'll link to it instead as the words would not stay where I put them! 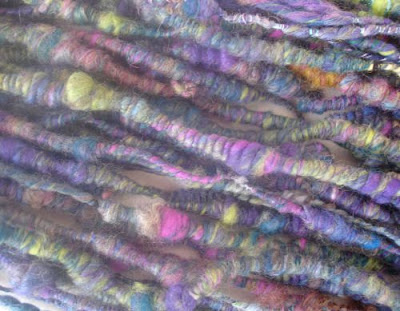 I recently invested in Pluckfluff's new book Intertwined, there's alot more information about how to go about making some of the yarns that appeared in the first book, and it also goes on to show examples, and ideas of projects for those 'art' yarns. This is my first attempt at a supercoil yarn. 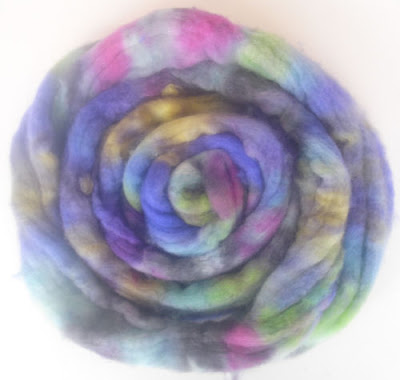 This is the second 100g of a fibre that I dyed and spun last weekend, I just wanted to show you the 'before' and 'after' shots! I might get the second one spun this weekend! 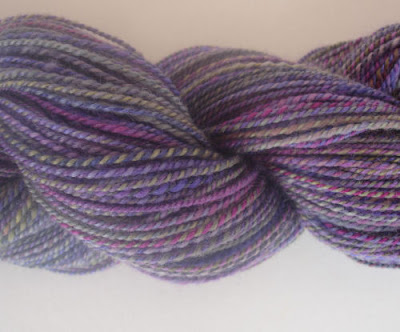 It's still only half as fine as I intended, but pretty just the same I guess! I also wonder if you can see the similarity in colours, this is a pure co-incidence, the coil yarn was a bunch of colours and textures I randomly carded with the drum carder, but I realised after I'd spun the 1st hank of fibre how similar the colours were.

I will get around to drawing that competition next time!

Jo, you are just a Wonder with fibre, your supercoil is fantastic looking and as always, your dyed fibre and spun yarn is gorgeous!

Oh Jo your coiled yarn is gorgeous and your handspun is stunning. You are always so inspiring. I have decided you are too clever to be my friend!

Wow, that yarn on the bottom is delicious! I would never have guessed that it had come from the picture above. Great stuff!

I realy like your yarn its lovley.
Sorry my english.
Eva in Sweden

Supercoil, eh? I haven't heard of that before. The colors of the two skeins are very similar. Do you knit the same with supercoil as other yarns?

Oh that is yummy I too have ordered that book so that I can have a'play' Did you get the last issue of Spin Off?
Funny how sometimes the same colour seems to 'pop' up :) I do the same but its usually in shades of blue !!