MIA and news from the other side!

Instead of coming back every week, like I had hoped to I seem to have been Missing In Action for longer than normal.

I did have a bit of a break from knitting....I wasn't really happy with the sock I was knitting and the neck of the self designed sweater wasn't going as planned. 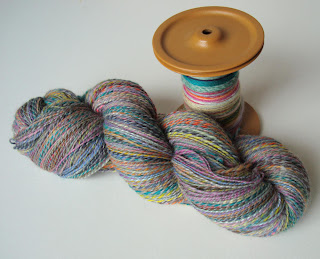 I did get some spinning done for the Tour De Fleece, this is from Scraps Swap 2 and 3, I have divided the 400g of scraps into 4 bags. This is the first skein and the second skein in progress on the bobbin. I am plying with grey merino and should have about 800g for a cardigan or sweater by the time it is all spun, I'm almost half way! 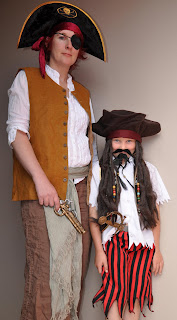 Last weekend we dressed up to take part in Pirate Day, and attempt to get the World Record for the most pirates gathered in one place, Hastings now holds the record with 6,166 Pirates! 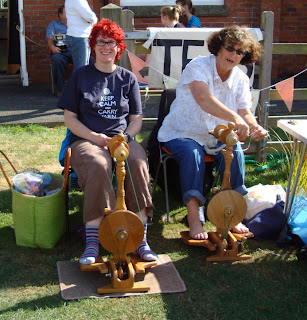 I have also been spinning and dyeing in public at the Kent County Show, and last weekend I was spinning at the Winchelsea Féte with the 1066 Spinners.

For anyone else who happens to stop by who isn't a friend on Ravelry and Facebook and hasn't seen my other news, there is going to be a new arrival next February: 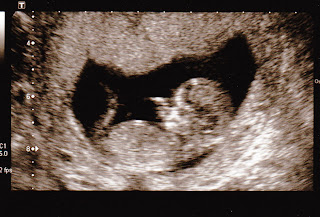 I was waiting for the 12 week scan before I went public, and now I am 15 weeks this weekend I can feel the baby moving around more.
Hopefully now my knitting mojo has returned as I need to get on and design the jacket or cardigan for my City and Guilds Handknitting. Ideally i would like to crack on and get it finished before the baby arrives, although I am having trouble getting a yarn and the early samples to work together!
Posted by Joanna at 3:52 AM

Congratulations on the work in progress, I didn't need to read to the bottom as the countdown clock at the top of the sidebar gave it away.

Pretty yarn, mine has all been a bit blah of late.

Huge congratulations! February is not too far away now the time will fly by :)

Very excited for you

Lovely spinning and photos too :D

Arrrrr, me Beloved Hearty! love the photo of you and Neo, look how big he's getting!!! Tall Boy!
Gorgeous yarn!
and Beyond Beautiful little One :^)
XOXOXOXOXOXOOXOX

Congratulations! Wonderful news and that's a great excuse to be away from the blog but hope to see you again soon!

The two of you made terrifying pirates! Neo looks like he thoroughly enjoyed dressing the part. Love the outfits.

Is he looking forward to a wee sibling? :-)

It is remarkable, this amusing opinion