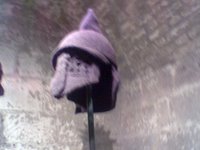 If only WYSIWYG was as simple as its supposed to be, I was having problems uploading these images late last night, there was a huge storm going on and the broadband connection was intermittent to boot! Its not just the computer which misbehaves and foxes me of course, another prime example is my watch which is only an old swatch which displays the day and the date (lest we forget). With the new month yesterday I needed to forward the date to the first, anyway it didn't get done, what with one thing and another so I attempted it myself this morning. 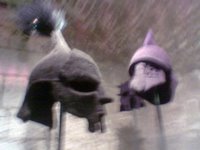 I managed to change everything but the date, at some point, and just as I thought it had me beaten it finally gave in, but the real trouble is next time I will be faced with exactly the same problem.

Still I'm progressing well with my cotton socks, should get them finished tomorrow and I'm already itching to cast on the snowflake sock.

I've also been battling the forces of flickr, yet again!! and came up with an idea to upload 365 photos, one a day to my alternate yahoo/flickr account as a 1 year photo project.

The trouble with this blog business is I'm taking alot more photos but thought it would be a nice experiment to limit upload to one a day into an online gallery.