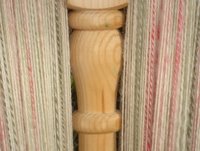 Finally finished this skein of yarn off at the weekend, it took a bit of spinning, but I wanted to spin what I would
call a useful, or even usable amount, this actually weighs in at 100g, and is 338m. I can't help but add up the
hours its taken me, but I don't want to put people off spinning. There's an almost perverse satisfaction in making something so labour intensive.
Grrrr and blogger is making me cross because no matter how much I move this text away from the above photo in my preview ...well its just not making any difference....just going to have to grit my teeth and move on! You will also notice its doing something weird with my text spacing, even adjusting the line spacing between these paragraphs and the later ones. Still I'm not the only one with problems, dear Mrs Knitingale (http://floknit.blogspot.com/) hasn't managed to get any photos up today. 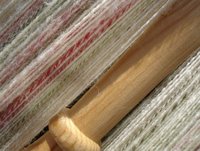 Sunday morning I even found time to bake some orange and polenta biscuits, they serve them at The Rooms which is the cafe where we hold Knit Jam, and Calire was kind enough to write the recipe down for me ages ago, but its taken me a while to actually get hold of the polenta.

Knitwise things have been ticking over on the scarf that I havent taken any pictures of yet, well until earlier this evening when I suddenly noticed that I had suddenly started knitting the wrong side on the right side and vice versa, for about 20 rows.....thought I was going to be casting it off tonight instead of unravelling.

I have also managed to block all the other 'vintage vogue jumper' pieces so I'm hoping to have another completed project soon.

Here, you've sneaked in a couple of posts and I wasn't aware...tsk, on me. So I'll comment on both...the orange polenta biscuits look lovely, they *sound* yummy! can you share the recipe? if not in a post, then privately? I promise not to sell it, or them...
opakawumpa@yahoo.com
if you are unable to...I will understand.
More importantly, that spun yarn is absolutely gorgeous! I will be so glad for the holidays to be over, did I say that? yep, I did. One of the things I've promised myself is to learn to spin this coming year and I'm terribly excited, are you spinning on a wheel? or spindle?
Really that yarn is just the loveliest.
Now on to your most recent post.

lamiss ibrahim said...
This comment has been removed by a blog administrator.
12:46 PM