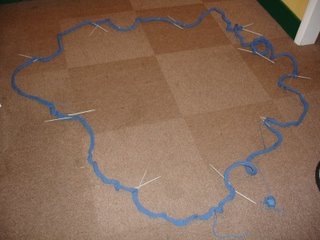 So here we are all cast on and ready to go...sorry the picture is so awful but the kitchen floor was the only neutral space big enough to lay it on, still tomorrow we hit Priory Meadow Shopping Centre for the Knitaround.
It is about 7 metres round and it takes about an hour to complete a round at what I would call a moderate knitting speed.
I've had what I think is a bright idea, many months ago when I came up with this idea of a giant circular knit, I contacted the Guinness Book of Records to see if there was a record for the largest circular knit and basically they said they didn't have any interest in it because it was being done by many people. Anyway it suddenly dawned on me Wednesday, it was staring me right in the face, people keep asking me what is it going to be and I had tossed around a few ideas but hadn't come up with anything firm, I had thought about it becoming a giant sock, or stocking, its obvious really because its a tube, so I went to Guinness and searched for a record for the largest sock, they have a new scheme here in the UK where you can text them a question, so I did.
The world's largest sock measured 4.95 x 4.3 x 1.9 metres and was made by members of the sheep farmer association of Austria. It became a record on 28th March 2005.
This tube measures about 3.5 metres across, I think that's in relation to the 1.9 metres as the 4.95 and 4.3 are surely the foot and the leg, but I'm not sure and I have failed to find any other information, or even a picture of this sock. But still I think this could be big!! What better than a supersized record breaking sock, knitted around the world, raising money as it goes.
All I need is to capture the imagination of knitters so I'm off to see Lolly in Socktoberfest world and we'll see how it goes!
Posted by Joanna at 12:33 PM

Labels: All Cast On and Away We Go

Amazing! It could be a small house *lol*